On Thursday, December 18, 1947, on page 16 of the Sherman Democrat newspaper, a new radio  heralded its beginnings in a full-page advertisement with the headline: "Here Is An Event for Which You Have Long Been Waiting." The owners, Joe Carroll and Elmer Scarborough, were proud of their investment, even though they sold the station just a year later. 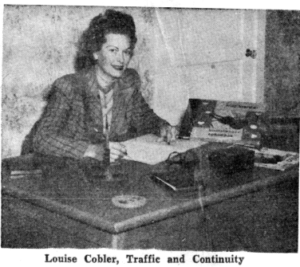 Otis McKenzie was announced as station manager of the new radio station in Sherman. McKenzie was already known in the area for his work at KRRV-AM, also licensed to the town. In the front office, Louise Cobler as program/traffic manager, commercial writer and program producer. Sue Hill was the station's accountant, receptionist and stenographer. Remember this was 70-plus years ago.

"Nothing has been spared to make your new Radio Station one of the finest of its kind on the air."

The program schedule noted that 1500-AM would present a full-day's offering. As a daytime broadcast station, that meant from 7:30 am until sunset each day. And while a listing of programs was printed, the ad also warned that "This is the program that will be followed for the time being. Changes will be announced in the Democrat as they occur."

Although the station will offer a large variety of carefully selected programs, its music will be principally of the recoded type which is universally accepted as the finest sort to be had."

Monday through Saturday, morning began with "An Ear for Corn," followed by "Time Out for Sports," at noon the "Farm to Market Report," then later in the day "Adventures in Jazz," then ending the day at 4:35 pm with 40 minutes of "Campus Classics."

Proud of the Record Library 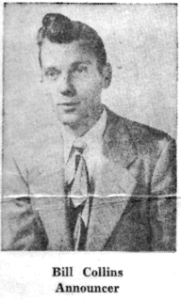 The radio station was proud of its record library. Shelves loaded with mostly 78-RPM discs and a few transcriptions discs. The first long-play album did not arrive on the scene until the next year, in 1948. Transcription discs were huge—16-inches in diameter—compared to the 12-inch that we know as a 33 1/3-RPM LP.

The ad in the Sherman Democrat boasted "More than 5,000 records are included in our Record Library which will open up to you a vast field of entertainment from the finest artists on earth."

Grayson County was created from Fannin County by the Texas State Legislature on March 17, 1846, just over 100 years before 1500-AM went on the air that December.

The county's population was at 70,000-plus in 1947, Sherman counted just under 20,000, and Denison tallied approximately 17,000 residents. For a growing population, the radio station joined others that were already serving the community.